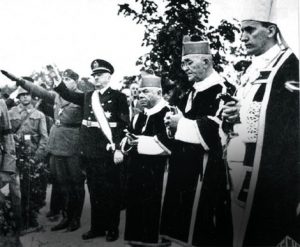 The events presented here constitute one of the darkest chapters of World War II. It is the mass slaughter of Serbs, Jews, and Roma in the Nazi satellite “Independent State of Croatia.” That “state” was based on an ideology of racial supremacy akin to that of Hitler’s Germany and in it there was no room for those who were not Croats or Roman Catholics. They were marked not for discrimination or repression, but for extinction.

The focal point of that slaughter was the concentration camp of “Jasenovac,” also known as the “Auschwitz of the Balkans.”

After the tragedy experienced by the Armenian people during World War I under Ottoman rule, in World War II Axis-occupied Yugoslavia Serbs, Jews, and Roma under the collaborationist rule of the Ustashi – Adolph Hitler’s eager Croatian acolytes – were subjected to the same kind of relentless and pitiless mass slaughter.

Referring to the Armenians, Adolph Hitler is said to have asked nonchalantly: “Does anyone even remember what happened to them anymore?” The Croatian Ustashi and their wartime leader Ante Pavelić must have taken great solace in that cynical question. They assumed that they would enjoy similar impunity for the genocidal crimes that they were contemplating – and committing with gusto – throughout the territory they governed under Axis sponsorship from 1941 to 1945.

The crimes against humanity that marked the brief yet bloody existence of the “Independent State of Croatia” need to be known and their innocent victims remembered.

Our task in the following pages is to redress the moral and historical balance. Those crimes will be made known urbi et orbi and their perpetrators and ideologues will be held morally accountable before the bar of world public opinion.